Not so long ago, a typical brief for a UK office fit-out would be geared around the needs of the company, and a desire to shove as many desks as possible into bland soulless workspaces.
From the employee’s perspective, the most exciting thing you might hope to see in a typical working day was the flashing lights of the coffee machine.

Thankfully, many of the smarter companies have come round to the idea that a vibrant and energetic workspace can lead to happier and more productive employees.
This in turn has led to a growing trend for creative and inspiring office designs packed with perks and benefits for the people who work there, instead of just ticking all the right corporate boxes. 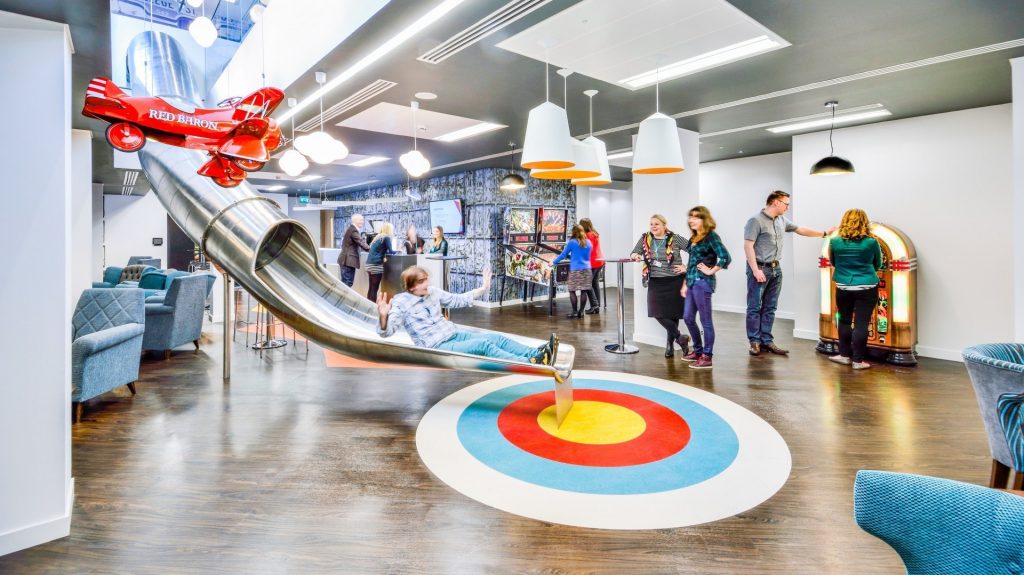 When the US-based online ticket retailer Ticketmaster decided to launch a new overseas Head Office in London, one of the key parts of the brief was sociability.
The Halo Group was commissioned to develop a 50,000 square-foot space which would incorporate several new workspaces, meeting rooms, breakout spaces, and most importantly of all, relax rooms.

Ticketmaster was keen for the final design to include elements of their own heritage and history. The Halo Group used metals, rough sawn timber woods, stone, textiles, copper piping fixtures, and other finishes to create an ‘industrial’ theme which evoked an atmosphere of traditional ticket venues.

But the standout feature is the ‘relax’ room in the basement of the building, featuring a bar area, pinball machines, and a jukebox.
Tickemaster could have gone for a standard method of connecting this basement bar to the workspace level above.
Stairs. Lift. Maybe even an escalator.

But nope, they went for a huge metal slide.
So when it’s time for the workers to down tools and head for a bit of light refreshment, they can take a quick trip down the slide to arrive with style and speed at the bar.
Possibly not ideal if you’re carrying loads of paperwork to share with the team, but a great way of bridging worktime and playtime.

On first glance here, you may be forgiven for thinking that you’ve stepped into an ‘Alice in Wonderland’-style garden, and that any moment you’re going to be challenged to a game of croquet by The Queen of Hearts.

But in fact, these are the futuristic ‘meeting booths’ which were created for the campus of the BBC’s MediaCity office in Salford.

Running with the growing trend of introducing an essence of the outdoors into a stuffy office interior, the booths capture the feel of a natural garden environment.
There’s a practical element at work here too – the huge collection of booths take up far less space than endless banks of plain meeting rooms. They also provide genuine privacy for quiet one-on-one discussions, whilst ensuring that the participants still feel very much connected to the rest of the open-plan floors.

This was just one aspect of a huge project overseen by Overbury which covered 380,000 square feet across 20 floors, and included 37 departments, live studio spaces and breakout areas.

Over 150,000 feet of cabling and 220 pieces of joinery were required to get the BBC’s vision for MediaCity into focus during a remarkably short space of time for such an ambitious development. 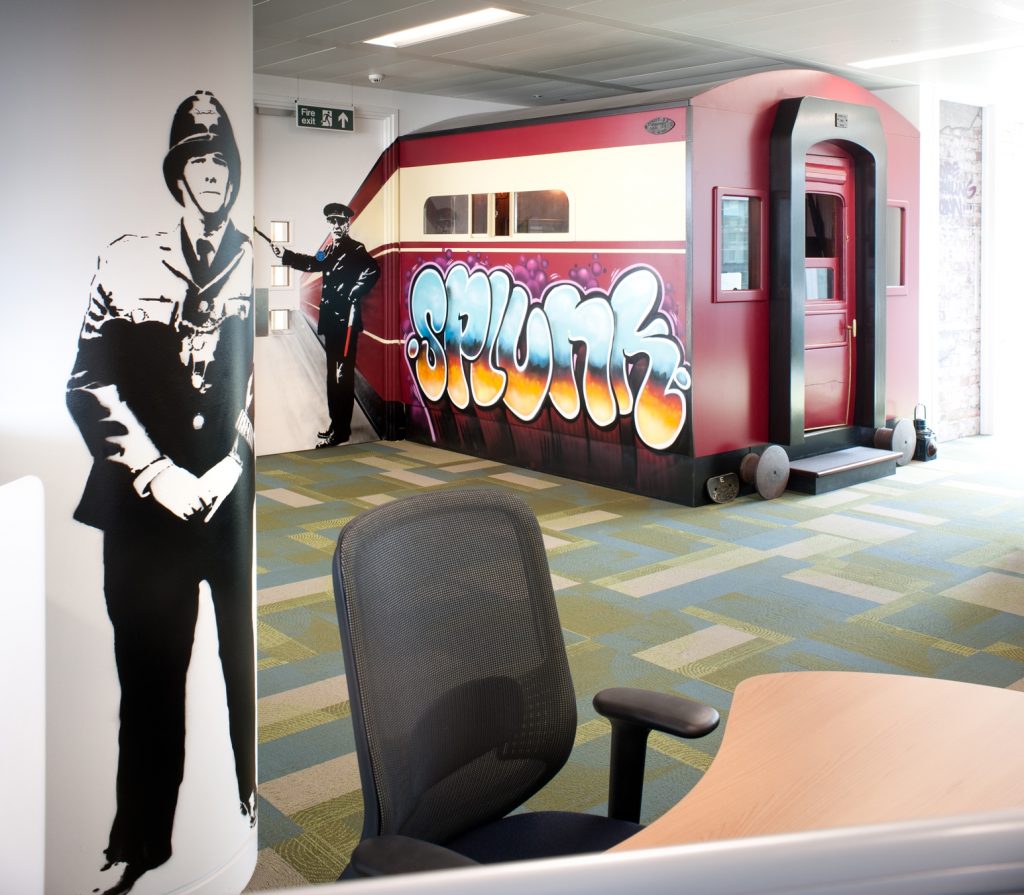 Take a pinch of Doctor Who, a vintage train carriage, a stack of graffiti, and a sense of ambitious fun, and you’re getting close to Splunk’s brief for their new office in London, just next to Paddington Station.

American real-time data providers Splunk were originally seeking a warehouse for their London office. Although they were disappointed at not being able to source anything suitable, they turned to Morgan Lovell to convert a more traditional office workspace into something that closely resembled their original vision.

The brief was to create an environment which reflected Splunk’s brand values of innovation, passion and disruption. The company was also keen to include something that referenced the local area.

A local Graffiti Artist was commissioned to create the ‘underground-style’ artwork which adorns the walls of the open-plan workspace and adds flavour to the original ‘Warehouse’ concept.

Walking through a police box door takes you inside the company’s ‘Demo Room’ which has been mocked up to resemble the futuristic interior of the Tardis from ‘Doctor Who’.

But the feature that really ticks all the boxes on the brief is the Pullman train carriage.
As well as providing a stylish nod to the neighbouring iconic train station, the installation also provides a fun, comfortable and totally soundproof location for the ultimate experience in private meetings.

Heralded by The Mirror, the Mail Online and the Manchester Evening Press as a strong contender for the best office in the whole of the UK, it’s certainly fair to say that Rentalcar.com’s office in Fountain Street, Manchester will take some beating.

The £2.7 million development covers 47,000 square feet and six very distinctive floors.
Developed by OBI Property, the idea was to create a ‘theme’ for each and every floor which would inspire creativity and a positive attitude.

The carpets on every floor are designed in the style of ‘roads’, so stepping out from the lift feels as if you’re coasting along on a scenic road trip around the company’s many different departments.
But it often feels more like an exotic cruise around the world, with one floor depicting scenes from Tokyo, New York, and Times Square.
Oh, and Manchester of course.

This Metropolitan theme obviously helps to excite clients, customers and visitors into dreaming of all the amazing places you can see when hiring a car from the company.
But the design goes way beyond a bit of self-promotion.

Each uniquely-themed floor features bright large-format graphics which help illustrate the specific theme and mood of each area.
The ‘Cars from Movies’ floor features rooms dedicated to Knight Rider, Transformers, Back to the Future, and even a top-secret ‘James Bond’ meeting room.
The ‘Roadtrip’ floor features a representation of Route 66 and a meeting room designed in the style of a sleazy Motel Room, complete with a ‘VACANCIES/NO VACANCIES’ sign to indicate whether it’s occupied or not.

The most exciting floor of all is right at the very top level, where you’ll find a beach-themed restaurant area, complete with Caribbean beach hut, and a dry grass office roof with hammock swing chairs.
Moving through the dining area, you’ll come across what might just be the icing on a superbly constructed cake.
A pool table.
But bearing in mind that we’re in the Rentalcars.com office, you may have guessed that it’s not quite your standard 9-ball pool table.
No, this one just happens to be carved from a Mustang.
It took 16 weeks to construct and proved to be one of the most expensive design elements of the whole project, but you can’t help feeling that in this environment, it couldn’t have been in the shape of anything else.

Mind Candy is the developing team behind smash hit online children’s game Moshi Monsters.
As you might expect, the company’s office at the Silicon Roundabout in London’s Old Street isn’t quite your standard corporate fit-out.
In fact, its our choice for the number one coolest office in the UK.

The design is intended to encourage workers to ‘think like a child’ and harness the creative energy of the company’s target audience.

Stepping into the main reception area feels like stepping into the world’s most wonderful treehouse, with a log cabin doorway, vivid green AstroTurf flooring, a giant log for a reception desk, and leaves sprouting from the ceiling.

Other meeting rooms are designed in the style of Gingerbread Houses, while ‘quiet’ areas of the workspace have made been made to look like quirky Hobbit holes.

The walls are adorned with vibrant murals which pay tribute to some of Mind Candy’s greatest gaming developments over the years, including Petlandia and World of Warriors. One wall in particular is plastered with black-and-white illustrations from Moshi Monsters which employees are encouraged to colour in at their leisure.

Cynics may suggest that the office resembles a wild adventure park more than a serious workspace, but Mind Candy’s continuing success in their field suggests that this creative playground is the perfect inspiring environment to craft and market the next generation of online gaming.