If we rewind a decade or two, it seems that just about every new business start-up or new office fit-out was adopting the Open Plan approach.
But is the Closed Office now slowly beginning to make a comeback?
What are the pros and cons of each layout, why is Open Plan beginning to fall out of favour in some quarters, and which approach is likely to be the top choice for the near future?

Breaking Down the Walls

Throughout most of the last century, most corporate companies preferred to go with the Closed or Enclosed Office layout.
The idea is that company employees are likely to be far more productive if they have their own private workspace or ‘cubicle’. They are usually segregated by the use of partitions, panels or pucca walls which provide privacy and peace, allowing the employees to focus on their work without any interruptions from whatever else may be kicking off in the office.

In contrast, the Open Plan Office smashes down the partitions to create a wide-open space – a working environment in which everyone is visible and has the opportunity to chat, collaborate, shout messages, or throw paper planes at each other.

Although some of us may think of Open Plan office layouts as a fairly modern development, we can see the origins of the idea back in the secretarial pools of the 1940s in which the sound of furious typing could be heard emanating from rows of employees packed tightly together like sardines.

Thankfully, the idea has evolved over the decades into a more spacious and user-friendly environment in which most workers can share large communal desks and actually stretch out their arms without accidentally punching a colleague.

It wasn’t until the 1990s that the trend for Open Plan offices really began to grow, and this was initially born from necessity rather than any great ambition to create a modern collaborative workspace.
During the dot com boom, many new business start-ups were looking for ways to save cash, and the Open Plan layout was quite simply a cheaper option.

But moving into the 21st century, the Silicon Valley firms were embracing the concept of Open Plan offices as a way of moving away from the spirit-crushing ‘cubicle farms’ of yesteryear, and developing a lively and energetic workspace in which everyone feels connected.

By the year 2014, over 70% of offices from around the world were open-floor, and it seems that the layout had now developed into the standard office design. 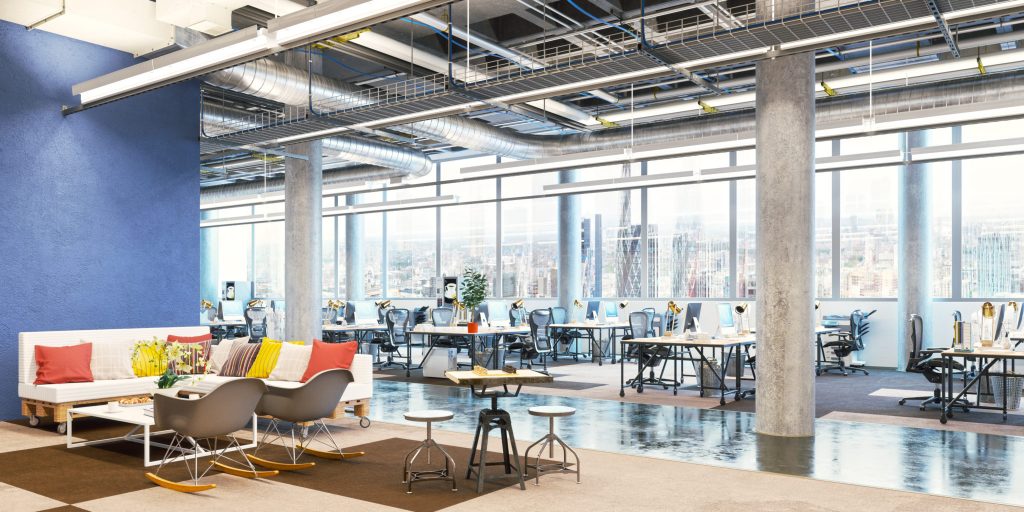 The potential benefits of Open Plan are as easily visible as the employees working in the office.

So, an Open Plan office may seem like a no-brainer; a natural progression from the stifling battery hen boxes of the last century.
But is there a little more to the story than that?

The Downside of Open Plan

Many people are widely tipping a returning trend for the Closed Office layout in the very near future, as some of the disadvantages of Open Plan offices are becoming more and more apparent.

Ultimately, there seems to be a growing feeling that Open Plan suits the company rather than the employee.
Companies believe that Open Plan offices create a dynamic and fluid and more sociable working environment, whereas many employees are actually just crying out for a bit of peace and quiet so that they can devote their full attention to the tasks at hand!

Opening Up the Office of Tomorrow

Of course, making the right decision between Open Plan and Closed offices often comes down to the nature of the business.
A company rooted in regular creative collaboration may benefit from Open Plan, whereas a working environment that requires quiet concentration may be better suited to Closed.

However, the winning approach for a modern office fit-out could well be a design that implements elements of both layouts; an office that features open plan areas for brainstorming sessions, collaborative work, and team discussion, as well as enclosed areas for those crucial moments when employees need to concentrate on solo duties without being distracted by office gossip and opinions on last night’s television.

If space is limited, a flexible working environment could even be considered in which removable partitions or portable furniture can be installed to quickly switch between the two modes of layout when required.

Or on a tighter budget, a partially enclosed workspace could be implemented in which employees still have some degree of privacy and peace, but also have easy access to the rest of the team without feeling hemmed in by four tall walls.

In a busy office of the future with a diverse mix of tasks and a distinctive set of challenges, why not embrace the very best of both worlds?