It’s hard to believe that it’s now twenty years since Kevin McCloud stepped in front of the cameras to introduce the first episode of a television show that was to develop into a surprise hit and a beloved British institution.

‘Grand Designs’ launched on Channel 4 in 1999 and the devoted viewing audience quickly got hooked on the triumphs and tribulations of some of the most ambitious and downright outlandish architectural homebuilding projects in the UK.

Over twenty years, we’ve grown accustomed to the tears, the tantrums, the teeth-grinding delays, the looks of horror as the project budget spirals wildly out of control, and Kevin McCloud’s adorably withering asides to the camera.

From converted caves to dilapidated houseboats to houses constructed entirely from shipping containers, the show has revealed the long-running stories behind incredible property transformations as fiercely determined homeowners strive to build their dream dwelling.

We’ve witnessed many high and lows over a whopping 123 different projects, but is it really true that just about every project is almost certainly destined to go over budget? Who were ultimately the biggest winners when it came to the final value of their completed house? Is your project really more likely to get featured on the show if it’s located in the South rather than the North? How long does the average project take to complete, and what’s the average spend per build? 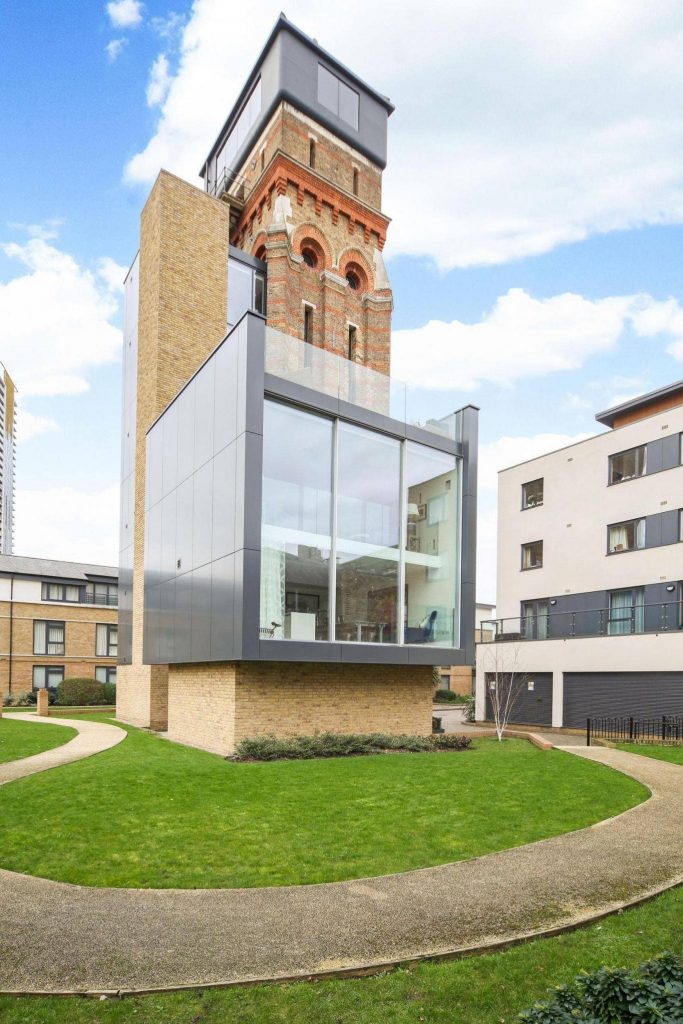 If you’re only a relatively casual viewer of Grand Designs, you might be under the impression that pretty much every single project goes massively over budget.
That often tends to be how things work when dealing with the unexpected blows and delays that create the whole drama of the programme.

There’s certainly some truth to the idea that a huge majority of the projects end up costing way more than originally planned.
In fact, over the course of twenty years, a total of 80% of the developments have gone over budget.
Some of them by quite a margin, although only two went over budget by more than £1 million.

One of those was a particularly nailbiting episode in which a couple attempted to convert a derelict water tower in Kennington, London into an extravagant modern home.
The conversion included the complete refurbishment of the 150-year old tower and the addition of a two-storey glass cube extension offering 360-degree views of London.
The project was plagued with problems such as the removal of hundreds of dead pigeons and even trees that were growing inside the building, although the biggest challenge of all was the fact that all the work had to be carried out on such a tiny plot of land.
Despite finances going right to the wire, and the couple having to rely on one of their Grandmother’s credit cards, it was eventually completed at £1 million over budget.

The biggest budget-buster of the entire series was a luxury ultra-modern property in the coastal village of Quarr in The Isle of Wight.
The huge 7,200 square feet house featured state-of-the-art technology including triple glazed windows and ground source heat pumps that nicely warmed up the home via underfloor heating.
Throw in a gym, a master bedroom suite with roof terrace, a heated swimming pool, a jacuzzi, and the small matter of an additional 3.8 acres of private beach, and you have one of the most breathtaking developments ever to have featured on the show.
But it came at a heavier price than the couple had ever bargained for, and they ended up taking out no less than eleven loans to complete it, much to the shock of host Kevin McCloud.
He later described it as ‘’the most expensive project I have ever followed”, and it eventually went around £1.35 million over budget.

The average proposed budget on a Grand Design build over 123 different projects is £371,213.
But considering that 80% of them go over budget, this naturally doesn’t reflect the average final spend which comes out at £495, 570.
So a typical Grand Design project goes 34% over budget. 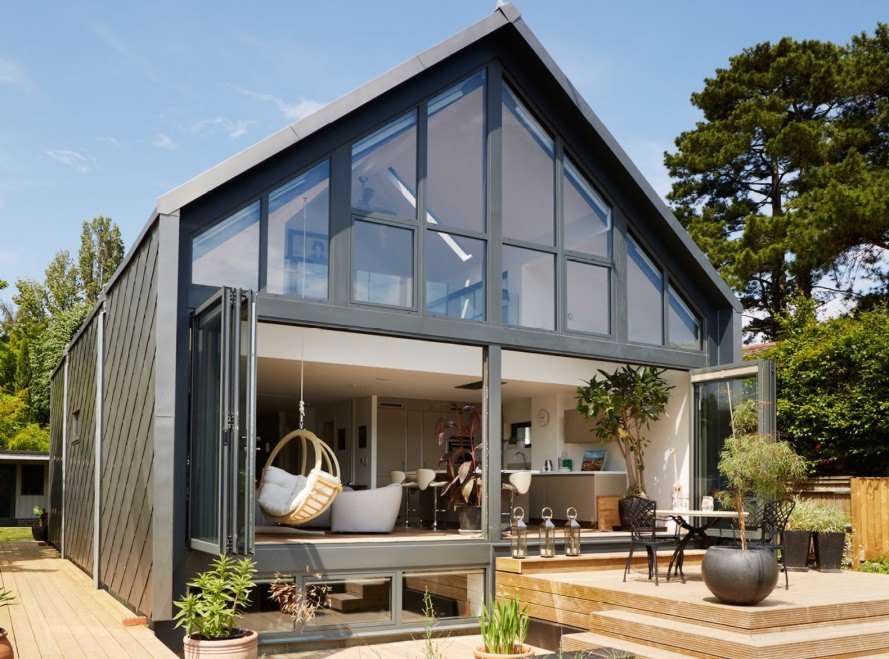 But it’s not always a matter of dramatic over-spending.
7% of the projects are completed on budget, whilst a further 8% actually defy the odds by coming in under-budget. (Another 5% are unspecified, as the owners refused to disclose.)

The biggest money-saver of the series was a ‘Floating House’ design in Buckinghamshire which Kevin McCloud originally described as ‘an experimental piece of engineering.’
The amphibious waterproof home situated on the banks of the river Thames was designed to ‘float’ in the event of a flood. A huge concrete base four metres below water level would form the basement of the house and ‘float’ during flooding, with the structure of the house remaining level thanks to the installation of mechanisms known nautically as ‘Dolphins’.
Although the project was seen as a huge gamble and was plagued with huge problems – including, believe it or not, the flooding of the River Thames!- it was eventually successfully completed at £100,000 under the initial budget.

Winning Big on the Market 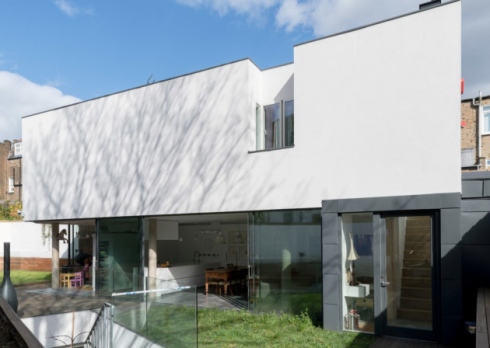 As you’d expect, unless something went disastrously wrong along the way, a typical ‘Grand Designs’ house is destined to be worth far more than the original budget if and when it hits the market.
It certainly can’t hurt the sale price if you’re allowed to splash the words ‘As Seen on Grand Designs!’ all over the marketing.

The average price for a completed Grand Designs house is £1.28 million, and a whopping 108% more than the cost of the original build.

The biggest winner of all time dates back to a project in 2013.
The modernist property in London was built on a tiny scrap of land but extended six metres underground to create a premium mix of living and work space, with its own Olympic length pool, sauna, and gym.
The project cost £900,000 to build but ended up going on the market for a staggering £3.95 million – the biggest ever difference between build and sale price.

However, it’s worth remembering that not every property manages to attract a buyer.
For example, let’s go back to that massively over-budget water tower conversion in Kennington, London.
It was originally put on the market for £6 million, then was dramatically slashed to £2 million before being taken off the market altogether and rented out for holiday lets. 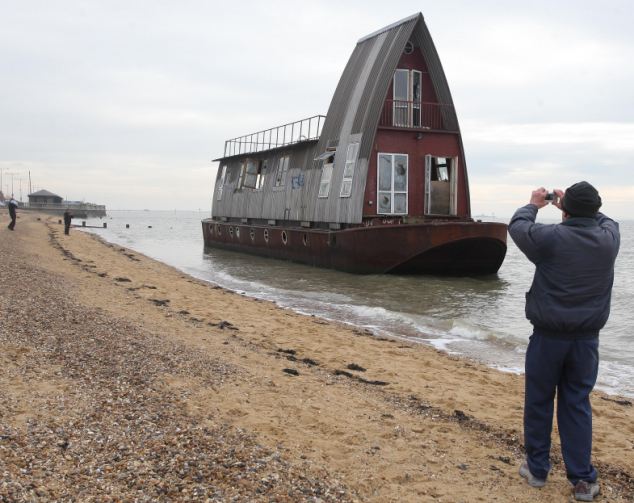 So how long does the average build take to complete on Grand Designs?
Well, the overwhelming majority of them are completed within a two-year period.
In fact, the average length of time from proposal to completion is 17 months, although 47 of the projects were successfully completed in under a year.

Naturally, when unexpected problems and delays have cropped up, some developments have stretched out way beyond the average figure.
A small number of projects have taken as long as four years to complete, whilst one notable development – The Devon Cob house – was actually dragged out for seven whole years.
Just a couple of projects were sadly abandoned altogether, including the Medway Eco Barge.
This attempt to convert an old boat into a stylish modern home was dubbed by McCloud as a ‘floating scrapheap challenge’ and racked up costs of £80,000 before getting dumped in an estuary in Leigh where it was left to gather graffiti.

Although some projects may end up in unusual places, the starting location tends to be a lot more predictable.
The show has often been accused of having a strong bias towards the South, and it has to be admitted that the stats clearly reveal the truth of this North/South divide.

Looking at the 123 projects to have been featured in twenty years of the show, only 23 were built in the North while 100 were built in the South.
The most popular location by far is, as you may expect, London which has been home to a total of 21 projects, just two behind the figure for the whole of the North.
Sussex takes second place with 11 Grand Designs, whilst Cornwall, Devon and Kent have all made more than 5 appearances.

So, if you ever fancy your chances of getting your development featured on the award-winning show, there’s several things you can take into account from the data pulled from more than 125 hours of television.

Ideally, you’d be looking at an initial budget somewhere between the £200,000 to £300,000 range, but very much prepared to go considerably higher.
You’d need to commit an average of 17 months to the project, and be braced for a barrage of potentially withering but highly amusing comments and opinions from Kevin McCloud.
But to stand the biggest chance off appearing on the show, you’re probably better off building your project in London.