If you were fortunate enough to get your hands on the commission to design the new Lego H.Q. in Denmark, one of the first ideas that would surely pop into your head would be to build the whole thing out of Lego bricks.

But that idea could be a little too ambitious, considering that the ultimate plan is to construct a new 560,000-square-feet extension to the existing office.
And using Lego bricks could potentially lead to a few problems with damp and structural integrity, amongst several billion other things. 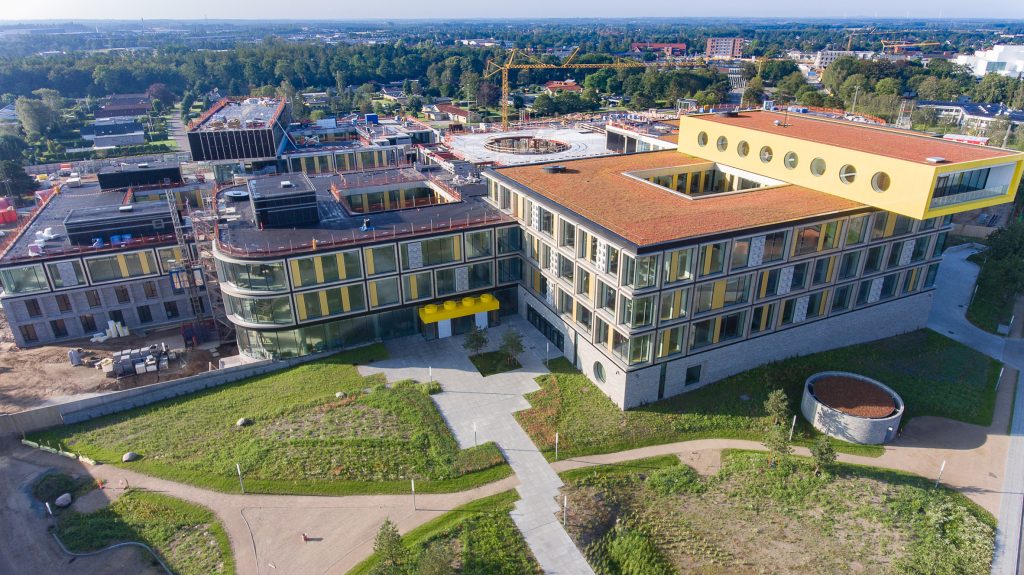 The small town of Billund in Jutland, Denmark, is where the toy story of Lego originally took shape way back in 1932.
The best part of a century later, it’s still very much the thriving production hub of one of the most successful products of all time.

Of course, the town is already home to the original Legoland resort, but this new development, just a couple of streets around the corner from the famous adventure park, is intended to house the more serious business behind the colourful bricks.
Or is it?

The brief was to design a super-flexible new headquarters with sustainability in mind; a whole new campus which would be built around some of Lego’s core company values such as fun, learning, quality, and caring.
And CF Møller Architects have certainly got on board with this playful vision.

The massive construction project isn’t set to be fully finished until 2021, but the architects have recently unveiled the results of the completion of Phase One, and Lego employees are already moving into the first two new office buildings on the campus.

The first thing you’re likely to notice when stepping onto the grounds of the new development is the giant yellow Lego brick ‘Skyroom’ on the roof of the office, which will be used as an open plan boardroom.
But in fact, on closer inspection, you’ll see a myriad of Lego bricks and yellow panels scattered across the facades of the building.
These aren’t just there for the fun novelty factor. They will eventually have a practical value too.

When the whole development is completed, each individual building will be distinguished by its own colour, and these distinctive Lego-inspired elements will double up as ‘wayfinding graphics’ to ensure that visitors don’t get lost in the Lego Labyrinth of the complex!

Not unlike a typical Lego model, the finished complex will effectively be one giant construction with interconnected wings that will seamlessly link all the separate office spaces together. 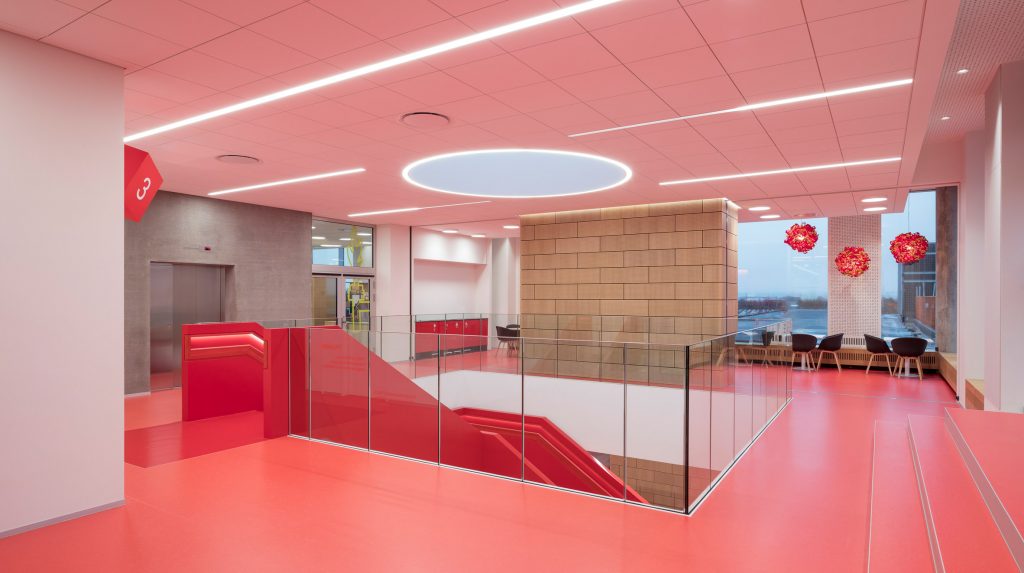 Dominated by brick and wood, the materials of the exterior are designed to inspire a “light Nordic expression”.

But stepping inside the offices reveals a bolder use of block colour in the workspaces which are divided up into ‘neighbourhoods’ to represent different hubs of the business.
Large windows overlooking the campus let in plenty of natural light to the open-plan working areas, meeting rooms and ‘quiet’ booths.
And there’s even a gorgeous roof terrace for outdoor lunches and brainstorming sessions, assuming that the sun is shining over the bricks of the office.

Of course, custom Lego creations are liberally scattered around the interiors to provide inspiration on every corner, but the focal point of the vivid interior has to be that awesome bright green spiral staircase, even if such a thing would probably have been quite difficult to install into an everyday Lego composition at home! 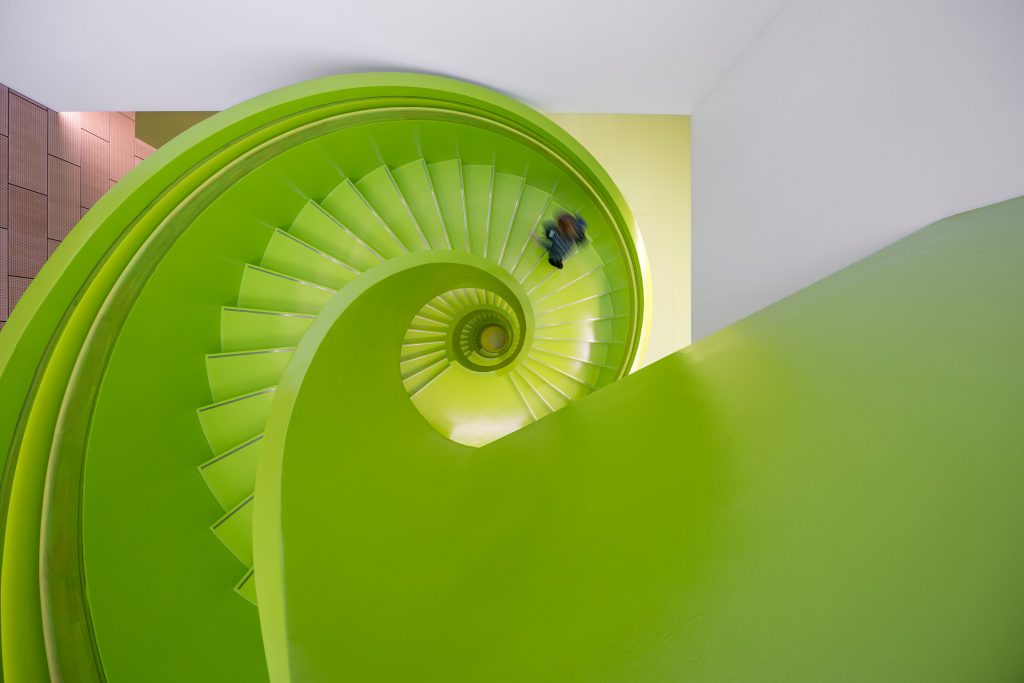 But what about the Sustainability side of the design brief, a core element of the Lego company’s “Planet Promise”?

Internally, the walls have been crafted from gypsum fibre board material to cut down on the amount of steel framing required, and reduce the embodied carbon in the office.
In fact, it’s estimated that this choice of material will save 22 tons of steel and 650 tons of CO2 emissions.

Externally, the rooftops of the complex are topped with Sedum plants which will absorb carbon dioxide and rainwater.
The rainwater will then be used to irrigate the green parks in the campus area.

Meanwhile, a nearby garage area – designed in the style of a Lego road playmat – has been topped with 4,150 solar panels which will produce more than a million kilowatts of energy – about half of the projected annual energy demand for the whole campus.

When the project is complete in 2021, the new complex will resemble a Mini Lego City where neighbourhoods will be connected by inner streets, stairs, squares and activity areas.
The ambitious project will surely go down in history as one of the most iconic constructions ever to be built in the name and the soul, if not quite the acrylonitrile butadiene styrene blocks, of the mighty Lego company.