Slated to be one of the greenest buildings of its kind in the world, 3.0 University Place, built in partnership with global icon Saint-Gobain, is soon to be developed in West Philadelphia, and will be a 190,000-square-foot, Class A commercial office building at 41st and Market Street. The project is set to be part of a new plan to create a “Platinum Corridor” of commercial and retail spaces that will meet the strictest standards for high-performing structures. 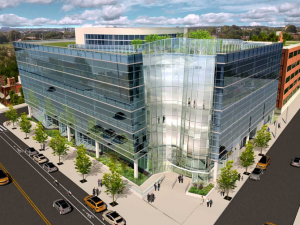 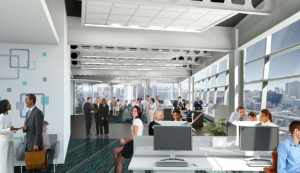 ‘3.0 University Place will be an unmistakable iconic symbol of University City’s emerging status as a world-class biopharma, research, and technology destination,’ said Scott Mazo, lead developer of the project. ‘Our partnership with Saint-Gobain, a world leader in sustainable habitat, and their SageGlass unit reflects our commitment to establish this project as a super cool, healthy, workplace showcase. The dynamic, tintable SageGlass Saint-Gobain facade will not only feature unmatched efficiency, it will provide a stunning exterior that will reflect light in an array of colours as the sun moves across the sky.’

Upon completion in 2018, 3.0 University Place will continue the development of the city’s Platinum Corridor, after the first project was completed at 2.0 University Place, the first multi-certified and multi-tenant LEED Platinum newly constructed office building in the world, featuring more than 100,000-square-feet of office space.

Certainly the largest installation of SageGlass in the world to date, the use of the pioneering material is being cited as one of the main components for 3.0 University Place being granted such a high LEED certification. Working in a similar fashion to photochromatic eye glasses, the electronically tinting glass dynamically adjusts daylight and manages temperature without obstructing occupants from the outside world.

SageGlass is a wholly owned subsidiary of Saint-Gobain, which has been a world leader in sustainable environments for 350 years and supplied building materials for the Hall of Mirrors at Versailles, the glass pyramid at the Louvre, The Statue of Liberty and The World Trade Centre, among many others.