In keeping with its country’s general philosophy of ‘Bigger is Better’, the Egyptian government has revealed its plans to build a 200m (660ft) high skyscraper modelled after what are arguably some of the most famous architectural structures in the world.

As part of a wider development for the Sheikh Zayed City district of Cairo, the massive construct – to be known as the Zayed Crystal Spark – is to be a forty-nine storey tower made up from two new and connected pyramids. A broad and relatively short pyramid will sit in front of a far narrower, much taller pyramid, in a fashion similar to an oversize foyer, and the Crystal Spark tower will overtake the Egyptian Ministry of Foreign Affairs building, to enter the record books as the country’s tallest building by some 50 metres. 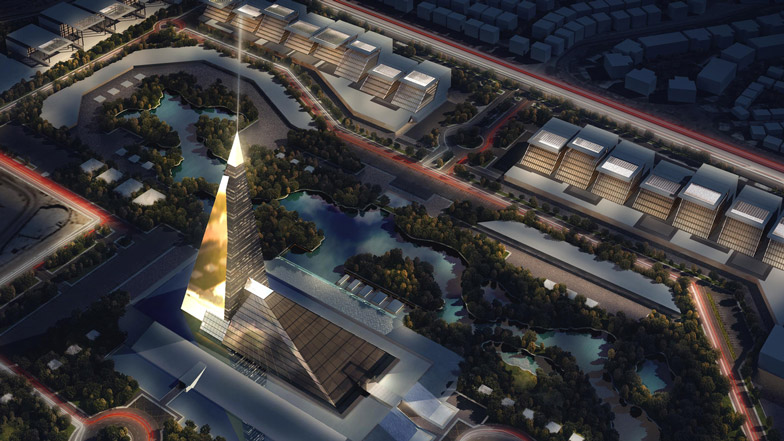 The Egyptian Minister of Housing, Moustafa Madbouly, has announced that the project will be run as a partnership between various real estate developers from around the country and the government’s New Urban Communities Authority, but has not yet revealed the name of the architect or architects involved. Also, there has been no comment yet about the expected cost of the build.

While the government is set to formally present the project during an economic development conference later this month, an event being held to boost investment in the country to help its troubled economy, the project was first announced by Mr Madbouly at a speech given at the Cityscape Egypt real estate event last month in Cairo. The first rendered images were revealed last week.

Mr Madbouly, during his speech, went on to point out how the building will be used for many different purposes, going far beyond just the 200m tower. He didn’t detail any of the prospective businesses or firms that may make use of the space, going on to explain that it will be an ‘administrative, commercial and entertainment project’. Whether any part of the building will be residential was not addressed. 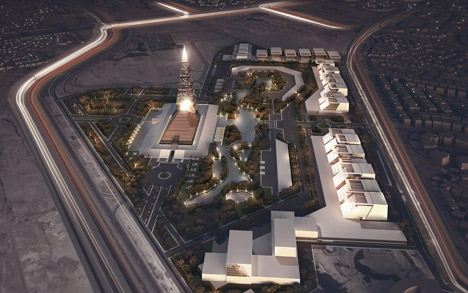 The new build is proposed to occupy a 190-hectare site overlooking the July 26 road, roughly a thirty minute drive from the historic pyramids of Giza. The grounds, according to the released images, will feature large amounts of shrubbery and trees, along with ample lakes and water features to increase the sites desirability. As proof of progress, the tower will be significantly taller than the 138m high Great Pyramid, which is the oldest of the Seven Wonders of the Ancient World, and the only one still in existence.