When earthquakes hit vulnerable population centres like Southern California, Istanbul in Turkey, or Kathmandu in Nepal, buildings suffer. It’s a fact of life. Buildings are built to withstand vertical pressure from gravity, so when earthquakes apply massive horizontal or lateral loads on them, they can’t cope.

But what of the structures were built to move with the tremors? In short, what if a building could rock with the quake? That’s a solution that is being proposed by an engineering professor at Case School of Engineering, Michael Pollino.

It’s accepted that most low-rise builds are designed to deal with a 10 percent chance of an earthquake over their 50-year-life, but in a high-risk zone like Los Angeles the risk is closer to 50 percent over those same 50 years. In the first instance, repairs are likely to be needed while, in the second case the building will probably have to be demolished.

So, Pollino came up with a computer model to demonstrate his new design for a three-storey structure that can rock to absorb the seismic force placed on it by attaching steel-braced columns to the foundation by steel-yielding devices and viscous dampers. These devices are able to independently raise and lower, thus allowing the building to rock from side-to-side as force is placed on it. 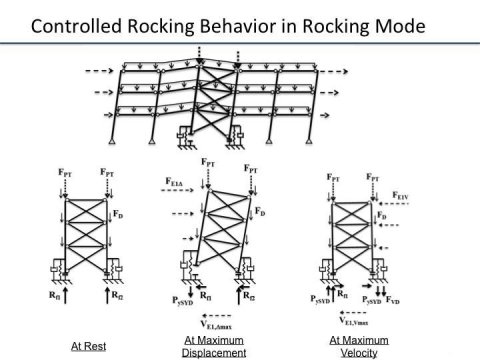 This technology has been around for some time, but what Pollino did was compare his ‘rocking steel braced frames’ to current earthquake safety standards in his computer model. The model has also managed to calculate the ideal sizes for the two main components of the rocking frame: The damping devices, similar to the shock absorbers on a car, and the steel-yielding devices that are designed to interrupt the stresses being put on the rest of the structure, like an fuse blocks an overload of electrical power, only without breaking.

The steel-yielding devices allow the steel braces anchored in them to stretch back and forth and dissipate the energy before it gets transferred to the joints where columns and beams meet. Traditional earthquake proofing relies on a building taking damage and deforming its shape to handle the loads, but Pollino states that the rocking system is far superior.

A key point of this design is that after the structure has rocked its way through a seismic attack, the natural restoring force of the building’s weight allows it to settle back to normal after the quake with a straight and intact frame, and little more than cosmetic damage.

As a further addition to the computer model, the motion passing from the ground through to the upper floors was simulated to gauge the destruction happening inside a rocking structure, such as damage to air-conditioning ducts, partition walls and plumbing, and use the data to help decide on the optimal size of the dampers and yielding devices.

Professor Pollino is utilising the findings from his computer model to try to get funding for physical testing. His end goal is to develop a new design standard for structural engineering in earthquake zones.