Imagine living in a cool, urban rooftop apartment in one of the world’s major cities. London, for instance, or Rome, or maybe Paris? With a trendy address, a close proximity to all those cafés, restaurants, landmarks, nightclubs and theatres, and a view to die for over the rivers and cityscape. Now, imagine the rent you’d be expected to pay. It’s okay, go ahead and take a minute to breathe again, we’ll wait…

Fortunately, all around the world, architects are working to come up with new, unusual and innovative ways to create housing solutions in dense cities, that don’t cost the earth. One method, that’s becoming popular in Paris, involves a new construction that either pops up on, leans on, or extends from an existing building, as a concept that has earned it the nickname ‘parasitic architecture.’

And in the ancient Parisian streets, it’s a specific type of rooftop parasite that’s attracting all the attention. Right by the French Capital’s Canal Saint-Martin, three new apartments appear to have sprung from a centuries-old corner building. The modern looking steel and glass boxes are the result of local firm Stéphane Malka Architecture’s answer to the housing problem, that they call the 3BOX project. 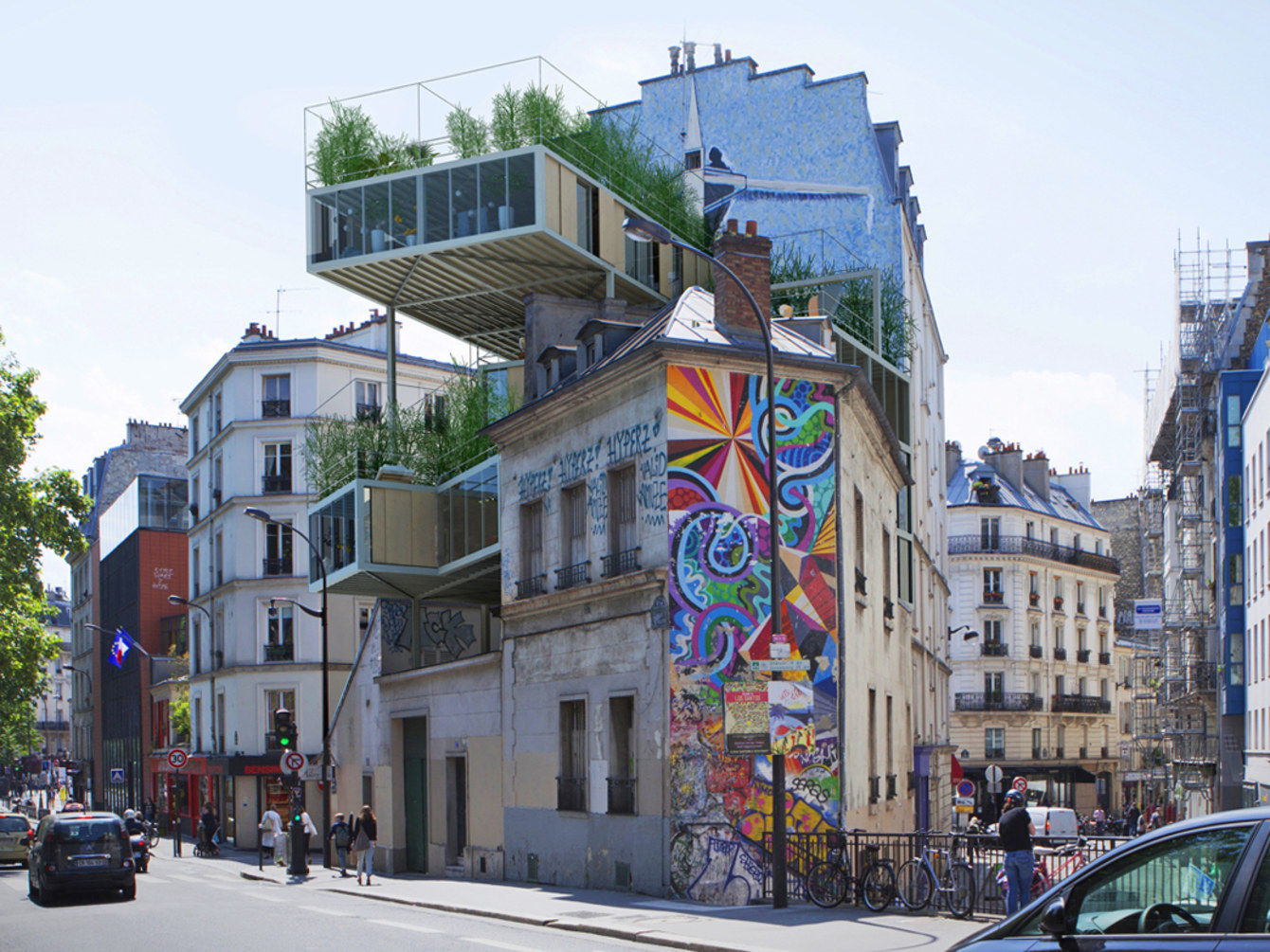 3BOX found funding with development company Les Toits du Monde, that’s intent on providing low-cost parasitic real estate in Paris, in an effort to make the most of a new city ordinance. Paris’s latest law calls for 70,000 new housing units, but allows them to be built at the same time as renovations, and includes provisions for rent stabilization. So, instead of buying incredibly expensive inner-city land, Les Toits du Monde, which literally means roofs of the world, bankrolls renovations for owners of existing buildings that require improvements to meet modern regulations for environmental regulations, disabled access, and so on. And, in exchange for something like improving the structure’s insulation or installing an elevator, these building’s landlords give the firm permission to build their parasitic structures.

The apartments themselves are prefabricated in workshops off-site and then bolted into place at some point during the renovation. When compared with re-developing an entire building or site, this process saves Les Toits du Monde a huge amount of money which, in turn, enables it to sell the apartments space for a much more reasonable price. The 3BOX project allows new dwellings to be built right in the heart of those city-centre, amenity-filled neighbourhoods that are so attractive, without adding to the city’s sprawl.

Also, the old, character-filled buildings are not demolished, just improved, and the new units are able to meet strict green-design standards. The whole concept promotes efficiency and sustainability and, in spite of the unfortunate nickname, the Stéphane Malka-designed units appear much more like luxury penthouses than affordable, parasitic housing. The modern glass boxes are pretty conspicuous, it has to be said, as they protrude over the street and stick out at odd angles from their host building but, at the same time, they aren’t ugly. Instead, they simply sit, representing a confident new wave of development in an old city.