A new worry in the City of London is that the need for the 250 skyscrapers, that are expected to be appearing over the next few years, will eclipse an even larger issue, literally. The planned high rise buildings will deliver much sought after work and living space in the cramped capital, but also practically blot out the sun for those nearer to ground level. 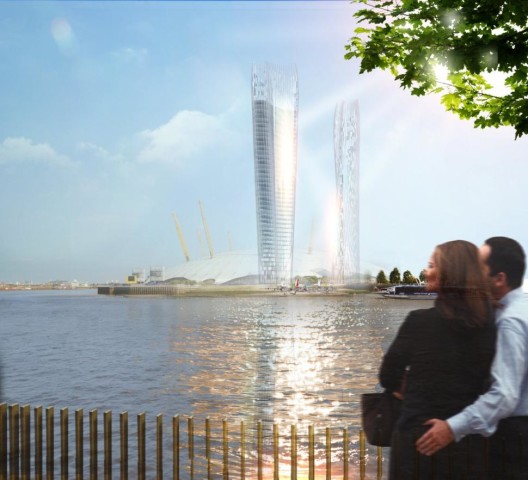 So with that in mind, a group of architects from the London firm NBBJ put their heads together and thought hard about a solution. In the end they came up with what is effectively a skyscraper that casts no shadow. It is a bit more complicated than that though, and involves some pretty out-of-the-box thinking but, according NBBJ’s design director Christian Coop, it works something like this:

A pair of skyscrapers are built a calculated distance apart, of which the northern one is built to resemble a giant concave mirror. The light reflected off this mirror-building is cast down into the shadow of the other building, the area and angle of the mirror carefully worked out so that the light follows and eliminates the cast shadow as the day draws on.

NBBJ are careful to point out that the light is diffused so as not to act like a focused light beam, capable of incinerating all below it. And we’re glad they worked that part out. The concept for these building, the project which has been termed ‘No Shadow’, is in fact a proposal for a pair of towers in Greenwich, which happens to be on the Prime Meridian. Coop states that, while this location made the calculations more straightforward, it is entirely possible to use the same design anywhere in the world. All that needs to be done is to change the software inputs regarding the angle of the sun passing overhead.

The software used was a design application called Rhinoceros. The designers began by putting in the requirements they had for office and living space footprints, then had the program incorporate the data into a design that would generate the most reflected light at the ground. After some… unusual suggestions, adjustments where made and the computers eventually settled on a design that begins with a thin base that grows wider as it grows tall. It’s said to reduce shade by up to 60%.

In places like China and India, where more skyscrapers are definitely going to be necessary and in Manhattan, where it’s said the proposed building there are likely to put much of Central Park into the shade, this design could be of great use.

Having structures that reflect light onto areas that have been thrust into darkness is not a new idea. Adding large mirrors to accomplish this has been shown to work well at Sydney, Australia’s central park. But this seems to be the first time a planned design has been thought out with the structure itself acting as the mirror, and still being able to fulfil its original design brief.