Vehicle manufacturers always seem to be trying to outdo each other when it comes to how much more courteous and useful they can make their products. First they gave us a roof to keep the rain off and then windows. Next came the car stereo, to entertain us as we drive, and the seatbelt, to keep us from falling out. From then on they went nuts; air conditioning, trip computers, phone systems, navigation, remote unlocking, all leading up to Mercedes making it possible for the driver to program, among other things, exactly how long the light that illuminates his rear number plate stays on for after he gets out, down to a tenth of a second.

And, over the last couple of years, aiding this driver to get into his car in even the darkest of dark nights has become a bit of a thing. Those manufacturers these days are now terribly worried about us falling and hurting ourselves while walking towards our cars, thus they have started to try to light our way. Just activating the exterior and interior lights when unlocked with the plipper was the start of it. But, while this was a great help in finding your car at night, it didn’t illuminate the surrounding dangers enough, it seems. 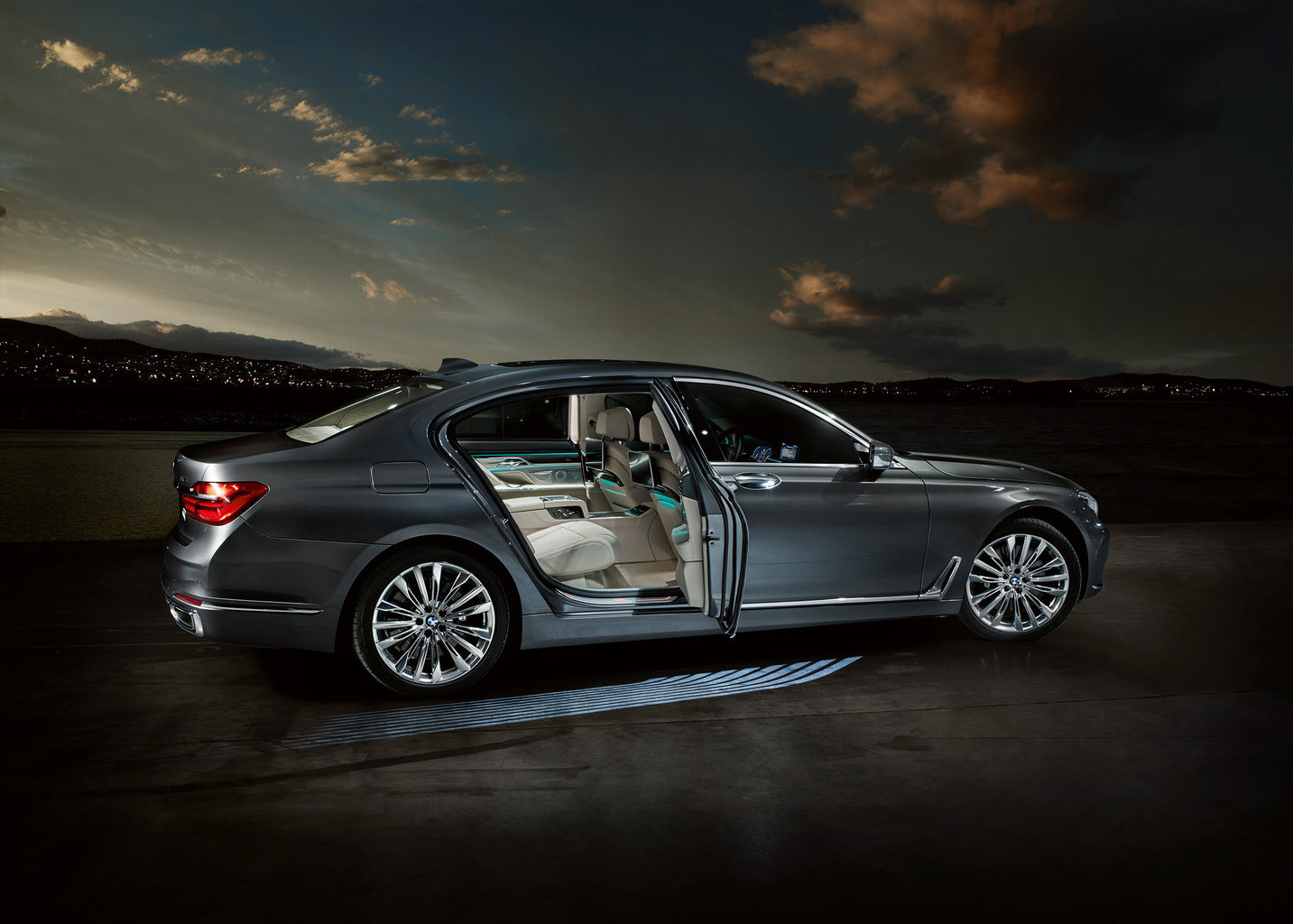 Several car makers have begun adding systems that shine a light on the ground in the vicinity of the doors, recently. Including Ford, who designed their 2015 Mustang to project a beam of light in the shape of its famous galloping horse from the door mirror to the road, thus identifying any potholes, scorpions or serial killers that may be lurking at your feet. BMW, however, thinks it has identified an issue. It says that lights integrated into the mirrors, like the Ford, as well as systems on the door lower, are flawed. If the light is on the door, it won’t illuminate the immediate ground until the door is opened and if it’s on the mirror, opening the door then swings the light away from the path of entry.

BMW turned to the Fraunhofer Institute for Applied Optics and Precision Engineering IOF in Jena for a solution. The result has been incorporated into the new 7 Series models and has been christened the BMW Welcome Light Carpet. It uses specially designed micro-optics to project a pattern of light beams from under the car to cover about four-square-metres around both sets of doors (fig. 1).

The IOF’s micro-optics projectors, built into the sill of the driver’s door, are able to give the illusion of bending around a corner to light a path because their micro-lenses can be aimed at any chosen surface. The IOF engineers originally intended to make a tiny, powerful digital projector, but found it impossible as a smaller projector, by definition, will produce less light. Instead, they created many very tiny projectors and bundled them together in a honeycomb design, which also allows the intensity of the light to be varied based on the number of projectors in an array.

In its first commercial application, IOF developed this new technology into a micro-optic assembly, measuring only ten square millimetres, which was then pointed away from the direction of travel behind a glass cover, to minimise any chance of damage. IOF predict that there could be a far wider range of uses for this type of array, including medical and mechanical engineering applications, due to the unique way the lenses can be individually positioned to project high-quality and high-intensity images even at an extremely low angle of illumination