In order to maybe distance himself from the ingrained image of the nerd/hacker hangout of a dank garage or over-stuffed dorm room, Facebook founder, chairman and chief executive officer Mark Zuckerberg has had his new office space, that now overlooks San Francisco Bay, somewhat enlarged. Yet still designed with his adaptive and versatile philosophy in mind.

The new building at Menlo Park is known as MPK 20. Designed and built by 86-year-old Frank Gehry, known for his work on the Bilbao Guggenheim in Spain and the LA Disney Concert Hall, Zuckerberg was compelled to employ the architect after visiting his offices, near Los Angeles airport. Gehry prefers an informal, open-plan concrete warehouse with high, skylight filled ceilings and simple plywood tables. According to Gehry, Zuckerberg said he wanted the same thing, but covering ten acres!

The result, which took 40 months and an undisclosed, but described as modest, budget to complete, is an unpretentious 434,000 square feet, with 22-foot-high ceilings and 15-foot windows, consisting of one floor and a very open working environment. With a closed office for no one, not even the boss, Zuckerburg’s ideology of a flat hierarchy leaves his 2800 workers inhabiting plywood desks that spring up as ‘neighbourhoods’ where power, internet connection and proximity to those who need to work together permits. 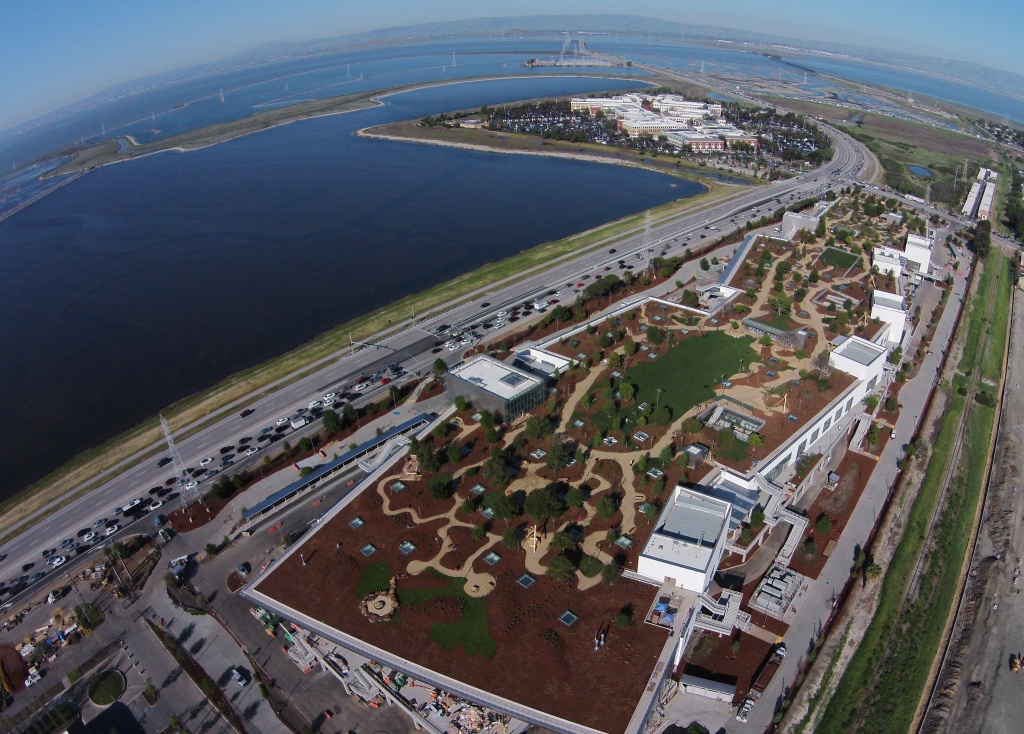 All this cohabitation and transparency is designed to encourage idea sharing, collaboration and sociability. The long, criss-crossing route that can be strolled along and around the spaces between desks, conference rooms and the cafeteria is there to be walked for the purpose of contemplation, mind clearing and inspiration. Zuckerburg is a long-time advocate for the rejuvenating properties of outdoor walking and hiking, and can often be found pacing the route in quiet conversation with himself.

Going a step further, Zuckerburg also had the entire roof laid out and covered a vast garden, including grasses, mature trees and mounted shrubs. Open to all employees and accessed through interior elevators or exterior ramps and stairs, the tranquil space offers nearly a mile of looping gravel paths, views of the bay on one side and the mountains on the other, and a gentle setting for meetings, deep thinking or even a quiet nap. There are also coffee stands and a café up there to help with the work effort.

It seems important to Facebook’s pragmatic headman that the perception of a company HQ as a status symbol, a gaudy bauble or a preened set of peacock feathers that show the world how success feels, is contemptible. Having a – relatively – cheap and generic workspace, that can be easily adapted to optimise the workflow, is far more important to him it seems, than a shiny sky rise or any ivory tower to perch on.