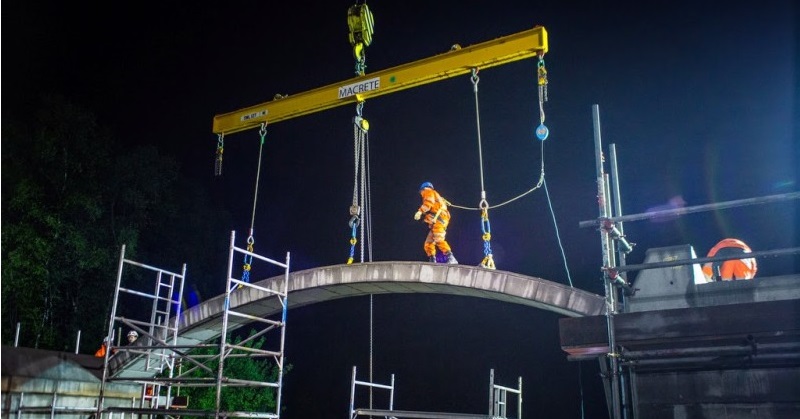 A new bridge being installed over the Wallington River in Waterlooville, Hampshire, just up the road from Portsmouth, may not sound like news. That it will span 16 metres is nothing so incredible either. But, that it’s made up from 17 separate units made from 16 tons of pre-cast concrete, and is able to be installed using a 200-300 ton crane in less than a day, just might be.

Because civil engineers at Queen’s University in Belfast, while collaborating with concrete specialists Macrete Ireland, have designed and built the world’s longest flat-pack arch bridge. Working on the FlexiArch system, the bridge is unique in that it can be transported to any site as a flat pack, and will revert to an arch-like shape through gravity when lifted.

The savings measured in both time and money by using this revolutionary system, when compared to traditional methods, are immense. A conventional arch would have taken months to build, cost immeasurably more and be projected to last about 120 years. The FlexiArch bridge requires very little maintenance and should stand steadily in place for the next 300 years.

The result of more than 10 years of research by Queen’s University Belfast’s School of Civil Engineering, there are over 50 FlexiArch bridges installed around the UK and Ireland. Professor Adrian Long, from Queen’s University’s School of Planning, Architecture and Civil Engineering, who patented the FlexiArch bridge concept back in 2004, was extremely happy about reaching this milestone saying it was the result of “…hard work, effective collaboration, and the combined expertise of the Queen’s and Macrete team.” He went on to say, “We are delighted with this latest development and of how successful FlexiArch has become.”

FlexiArch has seen continuous investment by Macrete Ireland, experts in developing pre-cast concrete designs and based in Co. Antrim, since they were granted exclusive licensing rights back in 2006. Project manager Abhey Gupta praised how easy it is to transport and install on site, even when it’s the largest example in the world. He also pointed out that the design is “…unique as its strength does not depend on corrodible reinforcement…” which helps to explain how FlexiArch bridges have such an increased lifespan over conventional designs.

Clearly, as time rolls by, even more FlexiArch bridges, as well as longer and wider ones will be implemented. Until that time, however, a new benchmark has been set and all involved can feel justifiably proud of themselves.