After a mere eight years of planning and delays through economic concerns, Danish capital Copenhagen has confirmed the go-ahead for its wildly ambitious, certainly outlandish, and bureaucratically necessary pedestrian and bicycle crossing over the city’s historic harbour entrance. Those with a fear of heights may wish to seek an alternative route

Designed by Steven Holl Architects, the structure is based around two asymmetrical towers, on opposing banks of the harbour mouth, that are joined by separate, enclosed bridges meeting in a “handshake” high above the water. The overall construction incorporates possibly the world’s most adventurous metropolitan cycle lane, conveniently suspended 213 feet in the air. 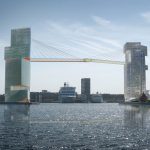 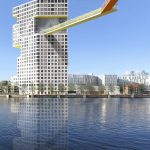 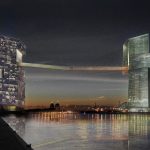 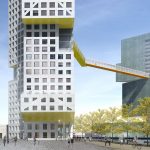 When finished, two towers will act as struts for the bridge crossing. The decision to not make them identical was taken in order to express the different characters possessed by each side of the city. The Langelinie tower, on the docks side of the harbour and housing Gate L, is expected to filled with bustling cafés, restaurants, and an open-air deck, while the Marmormolen tower, across the water and home to Gate M, is a connection back to the city proper, according to the design concept from the architects.

The two towers each have their own, distinct bridge suspended from them by cables, protruding out to sea at odd angles and painted different colours. Orange for the Langelinie and yellow for the Marmormolen, to reflect bright colours of the harbour, and made deliberately to appear is if they just happen to accidentally meet in the middle and connect.

Beyond being an innovative and fresh design that would always appeal to a both ancient and forward-thinking capital city like Copenhagen, an out of the box approach was required for this project in order to meet some very specific needs. The impracticality of the concept, which involves the use of elevators to carry pedestrians and cyclists up to and down from the bridge crossing, is essential for two particular reasons.

Firstly, it has to be so high because the crossing spans the entrance to a major, working international port and ships need to be able to enter the harbour unimpeded. Added to this, according to a certain section of municipal ordinance, no home in the walking and cycling focused city of Copenhagen is allowed to be further than 500 metres from public transport and, with no crossing, homes on built on the harbour mouth require their residents to skirt the bay for more than two kilometres in order to reach a connection, which violates this ordinance.

Steven Holl Architects initially proposed the design for the 2008 Copenhagen LM competition and won the project by a unanimous decision, as well as being officially awarded the Progressive Architecture Award in early 2010. However, budgetary concerns in the recent world economic climate shelved the plans until earlier in November 2015, when it was announced that the construction would finally begin in 2016.