Taking a dip in the 25metre-long pool that’s planned for the 2000-apartment Embassy Gardens development, near Battersea power station in affluent South-East London, is not quite as simple as plunging into your local authority’s public swimming baths. Suspended ten storeys and 35 metres above the pavement below, floating between the two new luxury apartment buildings with no visible means of support, the stunning looking feature may not be for swimmers who are faint of heart. 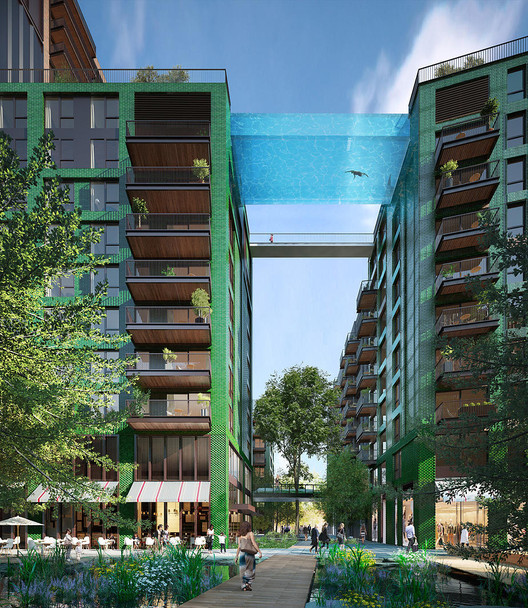 Sean Mulryan, Chairman and CEO of Ballymore Group, came up with the concept and left it to the architects at Arup Associates to realise. An entirely transparent outdoor pool, made from 20cm thick glass, magically links two buildings of the Eco World Ballymore development. In addition, the rooftops that access the pool are fully equipped with a bar, spa, sun deck and orangery.

Mulryan is calling the Skypool a ‘world first’, and says it stems from his desire to “… push the boundaries in the capability of construction and engineering. I wanted to do something that has never been done before.”

Designed as a cross between a pool and an aquarium, the Skypool’s transparent structure was made possible by “… the result of significant advancements in technologies over the last decade.” The pool is 5 metres wide and 3 metres deep with a water depth of 1.2 metres. After its scheduled completion in 2017, Mulryan says it “… will feel like floating through the air in central London.”

The Embassy Gardens complex, in the Nine Elms district of London on the South Bank, near to the new US Embassy building, follows the cues taken from former Ballymore projects which create spaces that feels like far more than just another same-old, cold structure. In particular, a good deal of inspiration was taken from the high-end apartments in Manhattan’s fashionable Meatpacking District, with the liberal use of brick facades and floor to ceiling windows.

And the 2000 new homes being created for the Embassy Gardens project certainly fall into the ‘high-end’ category, costing upwards of £600,000 each, and also featuring stunning landscaped gardens, a riverfront walkway leading to Battersea Park, and views looking out over the Thames, the London Eye and the Houses of Parliament.

Two new tube stations will link the residential area to the rest of central London, a new public square designed by BIG will be built, and plans have been unveiled to redesign the nearby power station’s iconic chimneys as giant glowing Tesla coils.

But it’s the Skypool that is likely to be the biggest draw, and will certainly be the most talked about architectural aspect. Arup collaborated with Reynolds, noted aquarium designers, and sought specialist advice from design engineers Eckersley O’Callaghan on the project. For the required ‘unearthly’ feel to the magical design, it was important that the pool remain structure free. There will also be a footbridge connecting the two apartment blocks, but nothing to distract from the illusion that the pool water is simply floating, suspended in mid-air.