Building a 450-foot tower, designed to contain luxury condos, office, dining and retail space, plus a hotel, in the Seattle suburb of Bellevue, Washington, which just happens to be one of the most seismically active regions in the United States might sound a little, shall we say, risky?

That being said, building two next to each other, for a total area of 1.5 million-square-feet, sounds plainly daft. But, thanks to an innovative solution from the University of Wisconsin-Madison, Cary Kopczynski and his structural engineering firm, CKC, feel confident that they can do just that with the new Lincoln Square Expansion project. 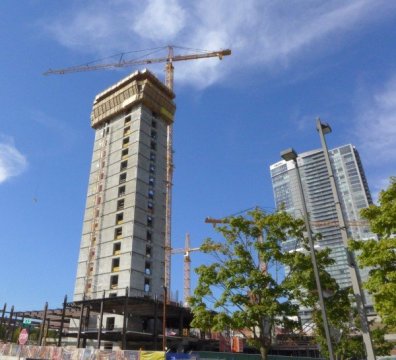 Normal practise in skyscraper construction involves using a complex maze of reinforcement bars to bolster the coupling beams, particularly up and down the earthquake-prone west coast of the US, to help buildings ride out any seismic strains put on them. This, unfortunately, adds a considerable amount of time, money and complication into a build, so professor of civil and environmental engineering at UW-Madison, Gustavo Parra-Montesinos, in collaboration with his opposite number at the University of Michigan, James K. Wight, have come up with an elegant solution that eliminates the need for intricate rebar designs, so simplifying and speeding up the construction process.

‘Placement of the rebar in these link beams can sometimes control the construction schedule,’ says Kopczynski. So he turned to this new approach, involving concrete reinforced with steel fibres being used for the coupling beams that span windows and doorways. The walls that incorporate these openings can then act as a single structural unit and strengthen the whole building against seismic stresses, without having to devote any valuable construction time to complicated rebar designs.

Professors Parra-Montesinos and Wight worked hard to ensure their fibre-reinforced coupling beams performed at least as well as, or better than, the most robust rebar designs and were rewarded when Kopczynski incorporated them into part of his 2013 project, The Martin, a 23-storey, 255-foot Seattle apartment building. A principle reason for using this new coupling beam technology in the Lincoln Square Expansion, according to Kopczynski, was the overwhelmingly positive feedback he got from his crew that used it on The Martin. ‘The reason we’re using the new coupling beams is that they’re faster, less expensive, and reduce the potential for field mistakes,’ he said, ‘With traditional coupling beams, it’s very common to have placing mistakes in the field because of all of the intricacy. Now, not only can we build the building faster and more simply, but we can reduce the potential for field errors.’

This new process is, of course, not yet included in the American Concrete Institute’s building code and so is under close scrutiny from peers and officials. The hope is it can make it into the new edition, due out in 2019, for which it needs to prove its ability to meet the minimum performance requirements based on standard material tests.

With funding from the Charles Pankow Foundation, among others, Parra-Montesinos and his team are looking into other key concrete components that steel fibres can be added to, in the hope of being able to minimise, or eliminate entirely, the need for rebar across the entire construction industry.