Last week saw the unveiling of a new approach to energy use through a combination of clean energy technologies, showcased by a new 3D printed vehicle and building symbiosis project. The Oak Ridge National Laboratory used its inaugural, two-day Renewable Energy Industry Day event to debut its newest idea, developed with Skidmore, Owings & Merril that can count the Willis Tower and One World Trade Centre among its previous designs. 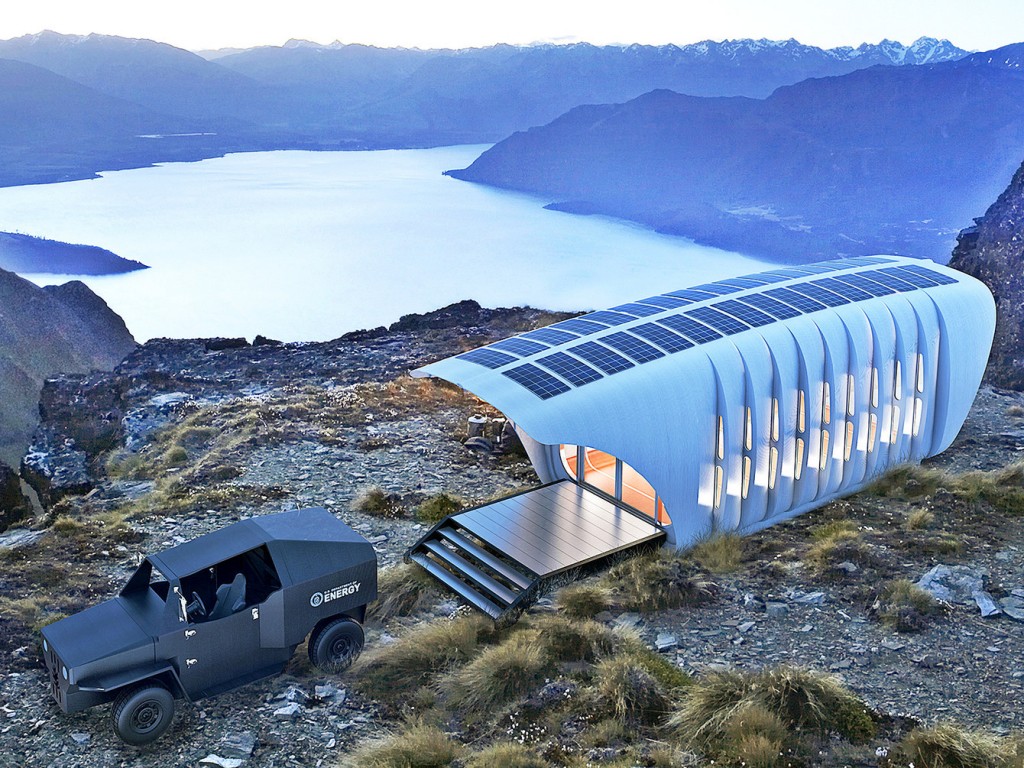 The Additive Manufacturing Integrated Energy, or AMIE, project has been designed and built to demonstrate an energy efficient system that links a home’s buildings and vehicles to the same grid. A hybrid electric/natural gas-powered utility vehicle works in tandem with 210-square-foot, solar-powered house, sharing their power wirelessly so that either section can remain fully operational regardless of time of day or weather conditions.

The SOM-designed house, measuring 38-feet-long, 12-feet-wide and 13-feet-tall, is made from 3D printed C-shaped pillars, placed like ribs to make a frame and vacuum wrapped to form an efficient thermal barrier that uses the smallest amount of space. Built by Clayton Homes, it features a 3.2 kilowatt, photovoltaic solar array as its power source which feeds into an energy control centre that monitors and manages the building’s power load and demands.

When the electricity demand from those living in the home outstrips its capacity is when the project demonstrates its reason for being. The utility vehicle, also made entirely through 3D printing processes, creates energy as it’s driven and stores that in an on-board battery until it comes home. This power can then be wirelessly tapped into by the energy control system to supplement the demands of the house. And, of course, any surplus energy from the building’s solar power system can also be redirected into the car to be used the next time it is driven.

Roderick Jackson, who led the AMIE demonstration project, explained how ORNL needed to design, “… a building that innovates construction and building practices and a vehicle with a long enough range to serve as a primary power source. Our integrated system allows you to get multiple uses out of your vehicle.”

ORNL researchers hoped to show how the fuel sources used by a home and car, usually kept separate, can be combined to work in unison through an integrated energy generation and storage solution approach and become a possible answer to the upcoming challenges facing the modern electricity grid.

“We’re looking at large community issues from the single-unit level,” said Martin Keller, associate laboratory director for Energy and Environmental Sciences at ORNL. “Our research provides solutions on a small scale, which will translate to a significant reduction in energy use and an increase in cost savings when ramped up to a national, and even global, level.”

The project was also a successful demonstration of how additive manufacturing can create prototypes so quickly, especially in vehicle and architectural design, as both the car and the house were produced on the same large-scale 3D printers.