Pressure may be mounting on the construction industry to embrace its carbon commitments and source greener materials for the projects of the future, but playing your part in helping to save the environment can often come with its own heavy cost.

Figures now indicate that around 5% of all manmade carbon emissions around the globe are generated from the production of the industry’s traditional building materials such as bricks, mortar, and particularly concrete.
Even more alarmingly, between 20-30% of these toxic materials just end up getting thrown in the skip.

So it’s not hard to see why the eyes of future generations are watching the industry’s next moves with some degree of expectation, and tomorrow’s trends will inevitably see a growth in demand for alternative materials.
In fact, we’re already seeing the changes in some of the bigger corporate design projects of today for clients who are keen to display their ethics and principles to a customer base with increasing awareness and concern for the environment.

But despite the noble intentions behind an avalanche of potential new eco-friendly alternatives which often claim to be the catch-all solution to greener construction, the industry hasn’t always been quick to respond in adapting to new ideas.
And often there are perfectly reasonable reasons why.

Here are four materials which promise to help us build a more sustainable future, including chocolate-style cladding, and bricks produced from cigarette butts.
Could any of them really develop into the industry standard of tomorrow? When is cement not quite cement?
When it’s CemFree.

This is by far the most well-known alternative material on our list and has already been used in some high-profile projects across the UK.
The Cambridge materials specialists David Ball Group have perfected the ambitious concept of good cement that doesn’t actually contain any cement.
The product instead is formed from ground-granulated blast furnace slag which requires less water than traditional cement and is still sturdy enough to be used in structural applications.

Compared to conventional Portland cement, CemFree delivers a 95% reduction in carbon dioxide emissions, as the stuff is essentially a by-product of other industries such as iron and steel making.

In fact, David Ball Group claim that if the whole UK industry gets on board, the positive environmental impact of CemFree would equate to removing around 750,000 cars off the roads every year.

However, there’s a downside.
The curing times are significantly longer which could cause unwelcome delays on larger projects for clients who are just seeking the quickest and lowest-cost solution.

Despite this potential drawback, the strength and sustainability of CemFree is still whipping up big attention and acclaim from both the industry and climate-conscious clients. 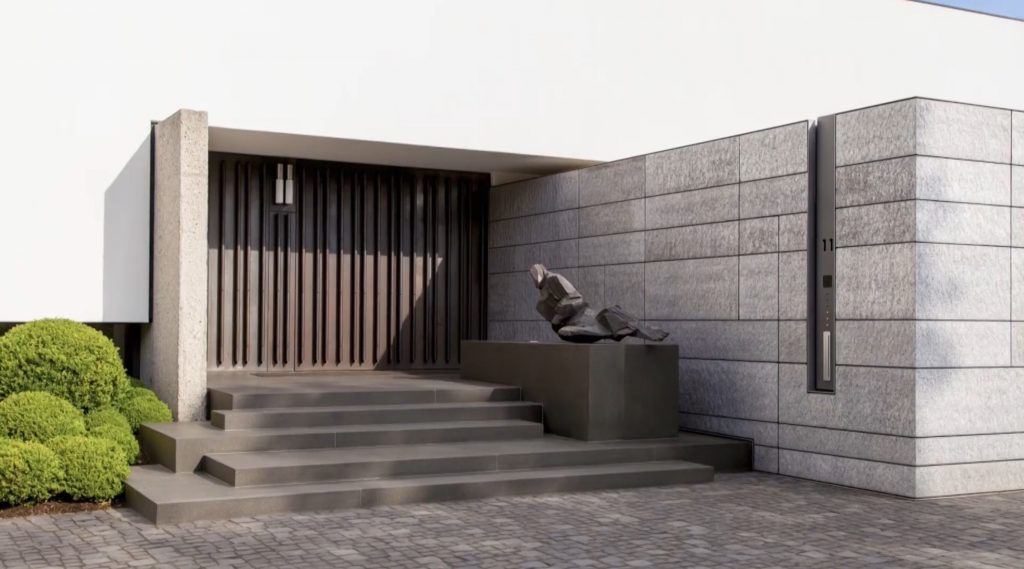 Whilst most contemporary cladding is rooted in brick, plaster, concrete, or sheet metal, one upcoming Canadian company is unwrapping the next generation of cladding by dipping their technological toes into a new coating based on chocolate.

Hang on, that can’t be right, can it?
Well, not quite…

The Toronto-based innovative materials technology company Cymat has come up with ALUSION panels for use in both interior and exterior installations.

The material is made by injecting air into molten aluminium. The dispersion of ceramic particles in the mix bubble together to form an effect that’s very similar to the way that air bubbles form in an everyday bar of chocolate.

The formula might not include either cocoa butter or milk, but the final result is a very tasteful and sophisticated design which is 100% recyclable.
And there are further advantages thrown into the mix; ALUSION panels are strong, non-combustible and are even soundproof.

With such a list of advantageous ingredients, it will be interesting to see how big a bite the construction sector is willing to take on ALUSION in the future. The idea of using mud and straw as building materials is hardly a new one – it’s a tradition that stretches back centuries, although it’s fair to say that’s it’s certainly fallen out of favour with the tougher expectations and legal requirements of more modern construction developments.

The concept of using good old-fashioned Cob is still packed with many potential benefits – for example, a construction team can excavate the material on-site when digging foundations in the clay-rich UK soil. This provides cost-effective building ingredients without the need to pay additional costs to have all that soil removed from the site.

But there are also serious obstacles to Cob constructions in the modern sector. Any completed buildings are hardly likely to pass the current Thermal Certification standards for architecture because of the way that energy passing through the cob walls can fluctuate so wildly according to interior and exterior conditions.

However, a team of British and French researchers working at the Plymouth University has developed a new version of ‘Cob’ which could be set to bring the ancient concept back to the very top floor of the industry.

CobBauge has been developed by bonding together two grades of cob – a strong thick clay for structure support and a thinner lightweight version for insulation which will double the energy efficiency.

The new product is tightly packed with potential, providing a low-cost alternative with an incredibly low level of embodied carbon.
We’ll see the first results when the team use CobBauge to build a full-scale house in the grounds of the University next year, and we’ll be watching closely to see if Cob really can rise to the surface of the building industry once again.

This may sound too outlandish to be true, but if it’s often the more bizarre concepts that end up gathering steam.

Smoking may well be bad for your health, but it’s bad for the environment too.
About six trillion cigarettes are produced every year which leads to 1.2 million tonnes of cigarette butts – that accounts for an estimated 38% of all waste.

However, researchers from the Royal Melbourne Institute of Technology (or RMIT) have come up with a new technique for adding those discarded cigarette butts to bricks.

The butts are introduced into the clay of bricks before firing, which reduces the energy required to produce the bricks by around 58% and slashes the amount of brick-baking time.
The cheaper and more eco-friendly brick is lighter and more efficient but still maintains comparable structural properties to traditional bricks.
On top of that, the Cigarette Butt Bricks (I’m sure they’ll come up with a catchier name eventually) have stronger insulation capabilities.

The firing process traps any toxic pollutants inside the brick so they can’t escape into the environment, and of course there’s the small matter of helping to eliminate a global litter problem with those millions of tonnes of discarded cigarette butts.

Time will tell if this intriguing new concept catches fire with the construction sector or if the idea is destined to go up in smoke.

Ultimately, the industry seems to be caught between a rock and a hard place at the moment.
While the pressure grows to adapt to new sustainable materials, the biggest immediate priority has to be confidence in safety, particularly post-Grenfell.
It’s understandable that the industry is not always eager to experiment with ‘new’ materials in the current climate, even if that means producing long-term damage to the future climate.

However, it’s inevitable that attitudes and demands will become increasingly driven by sustainability within the years to come, and some of these new alternative materials may well raise a cynical eyebrow today but could well be helping to raise the buildings of tomorrow.

Thinking of upgrading to Revit 2022? Aaron Maller goes into the benefits and what to look out for.
https://blogs.autodesk.com/revit/2021/04/06/bim-managers-corner-what-to-look-for-with-revit-upgrades-pt1/